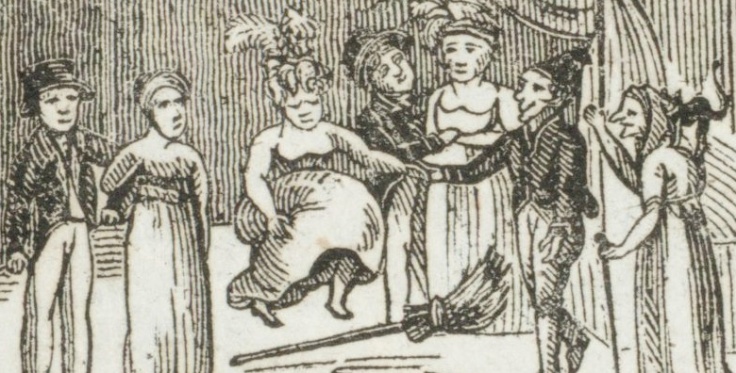 Weddings today seem such a stressful, complicated affair. If you have cast off the misery of a single life and plunged into all the misery of someone in pursuit of the perfect day, why not follow this eighteenth-century model of the Broomstick Marriage?

a) Get married with a number of other couples, ensuring reduced expense

c) Jump over a broomstick

d) Get blotto and pass out on the floor.

There doesn’t appear to be any legal evidence that such ceremonies were actually practised, but it was a common enough trope by the 1780s that the scandalous secret ‘marriage’ of the Prince of Wales and Maria Fitzherbert was described thus in a song printed in The Times: “Their way to consummation was by hopping o’er a broom, sir.”

“Here’s Dick and Dolly, Matt and Molly,
Assembled at the Maidenhead,
With Bill and Betty, Tom and Kitty,
O’er the Broomstick to be wed.
They drank and bouzed, and carouzed,
Till they snored on the floor,
Such a wedding and a Bedding
Never Mortal saw before.

SONG.– The piper and his wife,  the fiddler and his mother,
They made a bed on the floor, and they all laid down together.”

Detail from ‘The New Marriage Act, displayed in cuts and verse’ (1822).  Courtesy of the Lewis Walpole Library.

One thought on “Plan your own broom-stick marriage”